What should I know about ex-partes before requesting one in Irvine CA?

Are There Benefits to Filing for Divorce First in California?
Awarded joint custody cannot see child what is my recourse?

What Should I Know About Ex Parte Orders Before Requesting one in Irvine, Orange County, California? 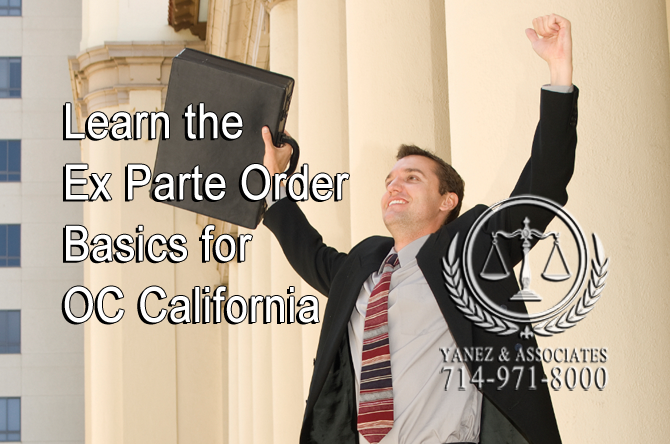 Ex parte orders are only issued in extreme circumstances. For example, one may be awarded in a severe domestic violence or child abuse case where the victim is facing immediate danger, and cannot wait for a trial to receive protection.

Ex parte orders are only issued in extreme circumstances. For example, one may be awarded in a severe domestic violence or child abuse case where the victim is facing immediate danger, and cannot wait for a trial to receive protection.

In order to be approved for an ex parte order, you would need to show very quickly that not having the ex parte order (or an immediate protective order) would cause severe injury to you, a child, or another victim.

Common cases where an ex parte order is used include the following.

An ex parte order is by no means permanent. It is illegal to issue an order that restricts another person’s rights or freedoms without giving that person a chance to state his or her side of the story. At the first hearing, the judge will decide whether to issue a more permanent order in place of the ex parte order.

What Can an Ex Parte Order Do in Irvine California? 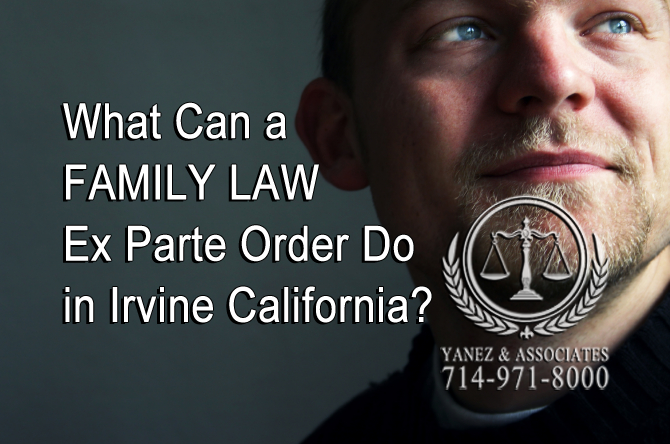 What Can a FAMILY LAW Ex Parte Order Do for me and my family in Irvine California?

• They provide immediate legal protection from irreparable harm to a victim or any children that may be involved,
• They are intended to prevent damage to and the loss of property.

In the case of an ex parte custody order, children who may face substantial danger in the presence of one parent will be put into the custody of the other parent temporarily until a child abuse or domestic violence hearing may be held. Ex parte orders are commonly used in custody cases when one parent becomes aware that the other parent is abusing drugs or alcohol, or otherwise living a dangerous lifestyle, ultimately putting the child in danger. An ex parte order would provide a temporary custody order to remove the child from the allegedly dangerous situation, and allow the courts to make a determination on the child’s best interests when it fit into the calendar of the court.

In the case of a restraining order, a temporary order can protect a victim, or an alleged victim temporarily until a domestic violence case can be heard. To obtain a temporary domestic violence restraining order, contact law enforcement immediately. You’ll need to speak with an attorney and file additional paperwork to extend the order within seven days.

In both cases, the victim is protected from danger prior to the hearing date by the ex parte order.

How Do I Obtain an Ex Parte Order in OC California? 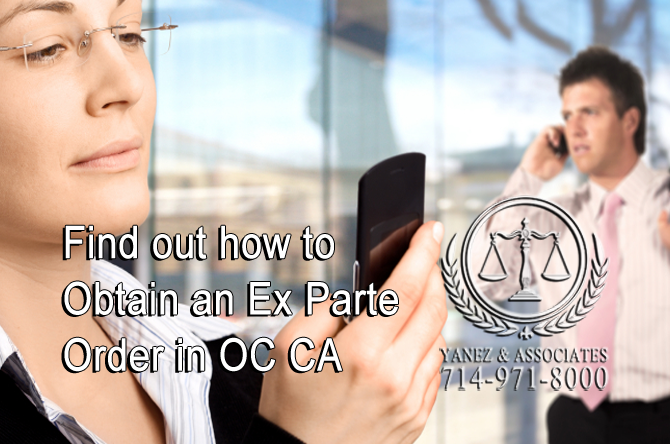 In order to obtain an ex parte order in California, check with a local attorney, and review the rules for the county in which you wish to file.

The idea behind an ex parte order is to provide immediate protection until there is room in the court’s schedule to hold an official hearing.

In order to obtain an ex parte order in California, check with a local attorney, and review the rules for the county in which you wish to file.

Usually, you’ll need to be able to prove that without the ex parte order, severe harm is likely to actually be caused. It is your responsibility to provide the judge with all relevant facts in your initial paperwork - especially because it is likely that there will be no other side to the story.

In Orange County, you’ll need to file all of the appropriate forms, including a proof of service that the other party has been served with the papers no later than 10:30 a.m. on the morning before your initial hearing. This is the hearing where the judge will determine whether or not to issue an ex parte order.

Orange County does offer the option of eFiling for these papers. If you choose this method, make sure to select Ex Parte under the Filing Type, and do not submit late, because your application may be denied.

It is required that you notify the other party of the hearing, however, the other party will likely not have time to prepare a defense at the initial hearing (where the ex parte order is issued).  If there is no opposing party, the ex parte application and supporting documents will be reviewed by the court prior to issuing the order.

If you have questions about obtaining an ex parte order in Orange County, or in any other county in California, it is in your best interest to act quickly and to contact a skilled lawyer in your area.

Best ex-parte attorneys for Irvine, Santa Ana, Anaheim and all of OC California

If you are worried about your safety or the safety of your child, an ex parte order may give you the peace of mind required to move forward and make a permanent legal change. If you are facing domestic violence, contact the authorities immediately. However, if an ex parte order is something you’re considering, contact a skilled attorney as soon as possible. The lawyers at Yanez & Associates offer free initial consultations to potential clients in Orange County.

Are There Benefits to Filing for Divorce First in California?
Awarded joint custody cannot see child what is my recourse?