How is Child Custody Determined in Same Sex Relationships in Orange County, California?

Even with recent changes to federal laws regarding same sex couples and marriage, the United States still has a long way to go when it comes to other family law related issues surrounding marriage, like child custody. California, however, is strides ahead of many other states. Same sex parents in California have many rights regarding their children that same sex parents in other states are still fighting for.

These laws are changing, especially in light of recent changes to federal law. California’s laws are intended to protect the parental rights of same sex parents whether they have adopted a child together or raised a child together from his or her birth. Although these laws are new, California’s laws are some of the most established in the nation, and the California Supreme Court has granted both heterosexual and same sex couples the same rights to children, including child custody, visitation, and child support. 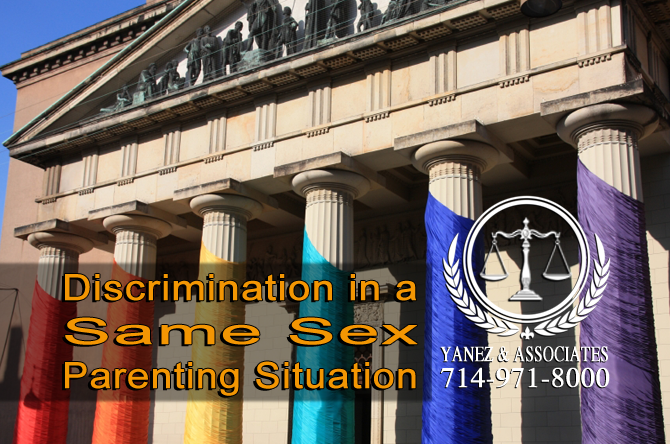 How does Irvine and all of California handle Same Sex Parenting Situations?

California law requires same sex parenting cases to be handled the same way that all other child custody cases are handled. In California, that means that California Family Code, Section 3011 regulates all custodial arrangements for all parents.

It is possible for certain judges, especially those who are not comfortable with the idea of homosexuality, to choose not to follow the law that requires all custody cases to be treated equally. Cases dealing with adjusting to new laws can be complex, and are best handled with the help of an attorney.

Even if you have a child from an opposite sex relationship, your child’s other parent cannot use sexual orientation as a way to affect a child custody arrangement. Custody in California is always determined based on the child’s best interests.

It is against the law in California for a parent to face discrimination in a child custody case because of sexual orientation. If you are facing discrimination either on the part of the other parent, a judge or another legal professional, or another person, contact a lawyer as soon as possible. Custody of your child should be determined according to your child’s best interests.

What Are a Parent’s Rights Regarding Child Custody in a Same Sex Relationship in California? 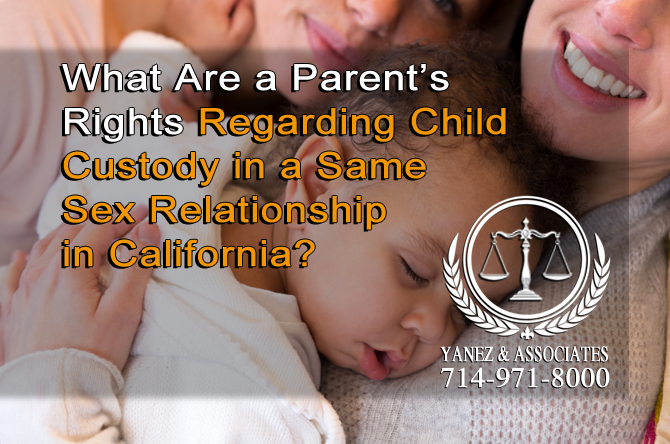 What are my Parental Rights Regarding Child Custody in my Same Sex Relationship in California?

According to California’s Family Code, all parents in California have the following rights to their children.

Keep in mind that no matter what your sexual orientation may be, as a parent, you have a right to both physical and legal custody of your child.

How is Child Custody Determined in Same Sex Relationships in California? 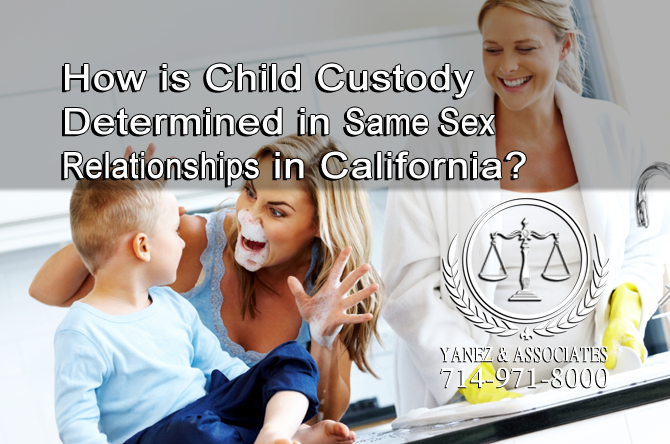 How will my Child Custody case be Determined in a Same Sex Relationship in a Orange, California family law court?

These are the most important things to remember when creating a child custody agreement in California. Once these factors are understood, two parents can move forward in creating their custody arrangement either on their own, with the help of attorneys, mediators, or other professionals, or in court with a judge.

Both physical and legal custody can be awarded in two ways: either solely to one parent, or jointly to both parents. Whether it is awarded to one parent or to both depends on which situation is in the child’s best interest.

When legal custody is awarded solely to one parent, it means that one parent has the legal right to make decisions for the child according to the custody arrangement. The other parent is required to go along with those decisions, and failing to do so would be a violation of the custody order.

When legal custody is awarded jointly to both parents, it means that both parents have the legal right to make decisions for the child according to the child custody arrangement. This does not mean that they always need to agree on every decision, but it does mean that the parents should work together to create a situation that allows the child to have a stable and consistent lifestyle.

In a lot of cases, determining whether to award sole legal custody or joint physical custody depends on the parents’ relationship with one another, and how much each parent is willing to put the child’s needs first.

Physical custody can also be awarded solely to one parent; if it is determined that this would be in the child’s best interest. If anyone, from your child’s other parent to a lawyer or a judge tries to use your sexual orientation as a way to take custody of your child away from you by awarding full custody to the other parent or not allowing you to see your child, you need to protect your parental rights. Contact an attorney immediately, and do not sign away your right to physical custody.

There are other reasons that a sole physical custody order might be created. Sometimes, two parents live too far apart to make joint custody feasible. Sometimes, one parent does not have a strong relationship with the child, and the foundation for the relationship needs to be stronger in order for a parent to have custody.

If you are in a same sex relationship and you have a child who was either adopted or biologically yours, you have rights regarding your child. California law says that all parents, regardless of sexual orientation, have the right to custody of their children.

Contact the lawyers at Yanez & Associates today to schedule your free initial consultation with a qualified child custody lawyer in Orange County.