FAQ: What are the rights of a Father Regarding Child Custody

Historically, when two parents are not together in the United States, it is assumed that the mother will have custody of any children they share, and that the father will have to pay child support. While this is in line with the traditional roles of a working father and a housewife mother, there is no part of the law in California that states that gender plays any role in child custody or child support.

Like mothers, fathers have the right to spend time with their children, and the obligation to ensure that the child’s financial needs are met. All parents in California have these rights and obligations regarding their children, regardless of gender.

Rights of a Father Regarding Child Custody in California 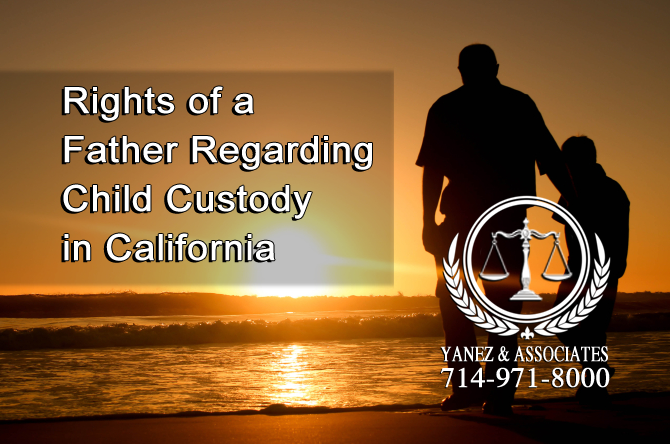 As a Father what are my Rights in Regards to Child Custody in Orange County & Los Angeles, California?

There are two kinds of custody in California: physical custody and legal custody. Child custody is always determined based on the best interest of a child, but both mothers and fathers have equal rights to both.

Physical custody refers to where a child spends his or her time. A father’s right to physical custody means that a father has the right to custody or visitation with a child, so that the father and the child can spend time together.

Legal Custody, on the other hand, refers to the right to make decisions for a child. These decisions are about things like the child’s health care, education, extracurricular activities, religion, and more.

As a parent, a father has the right to spend time with his or her child, as long as it is determined that it is in the best interest of the child.

If it is not in the child’s best interest, or if it is not possible based on the circumstances of the parents, joint physical custody may not be granted.

There are numerous reasons that a parent may have sole physical custody, depending on the child’s best interest, the location of the parents, and sometimes, whether a parent chose to hire an attorney during the custody battle.

In the case that a mother is awarded sole physical custody, a father has the right to visitation with a child. This may happen simply because the parents live far away, or the child has other ties to the town in which the mother lives.

A father’s right to visitation means that even if he does not have physical custody, either joint or sole, he still has the right to spend time with his child.

Violations of a Physical Custody Order

A father can also file an action for contempt in the case of a child custody violation on the part of the mother.

Legal custody may be granted jointly to both parents, or solely to one. A father has the right to either joint or sole custody, depending on the child’s best interests.

Violations of a Legal Custody Order

In the case that a father is granted legal custody, either jointly or solely, and the other parent violates that custody order, there are actions that a father can take to enforce and protect his rights. A mother does not have the right to make decisions for a child on her own while a father has either joint or sole legal custody of a child. If you have questions about enforcing a custody order, contact an attorney as soon as possible.

Issues That May Affect a Father’s Right to Custody 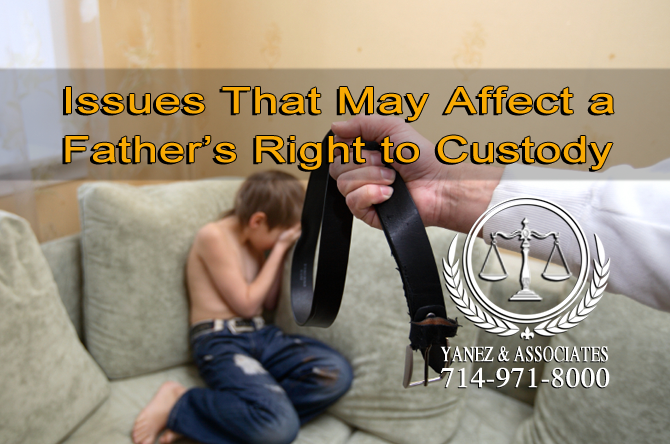 Some Issues that May Affect a Father’s Right to Custody can consist of False accusations of abuse or domestic violence.

Some issues may affect the rights of a father in the creation of a child custody order.

False accusations of child abuse or domestic violence, especially in the case of a restraining order, can affect any parent’s right to custody of a child. If you are facing accusations, always work with a qualified attorney in order to protect your rights.

A father who has not been in his child’s life may also face issues when it comes to obtaining custody of a child. However, a father who was not aware of his child’s existence, or a father who is away due to time in the military or another obligation has the right to get to know his or her child, usually through visitation, and then to apply for custody once a relationship has been established.

Rights of a Father Regarding Child Support 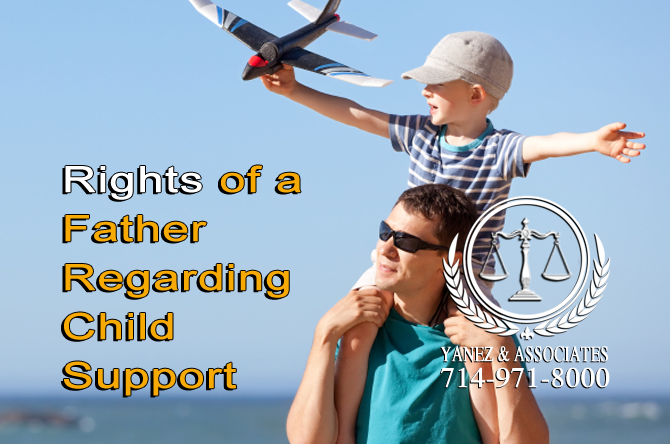 What are the Rights of a Father Regarding Child Support in Orange County?

Child support obligations always depend on the child’s financial needs and the parents’ ability to pay. A father is likely obligated to pay child support, but that does not mean that the mother has the right to be a stay at home mom rather than finding a job. A father has the right to enforce the mother’s obligation to financially support a child.

Following a divorce, if a mother does not find work, a father has the right to obtain a court order that requires the mother to find gainful employment in order to support herself and any shared children.

In order to enforce all of a father’s rights, it is always smart to obtain a legal document, called a court order. Court orders can be legally enforced, and are one way to ensure that a father’s rights are protected.

It is not uncommon for a father to settle for less than he is entitled to simply because it has been accepted for some time in the United States. However, a father who is granted joint custody has the right to a parenting plan that offers both parents equal rights to the child.

If you have questions about your rights as a father, or if you need to establish paternity in order to exercise your rights, contact a qualified fathers’ rights attorney at your earliest convenience. The lawyers at Yanez & Associates offer free initial consultations. Contact us today to schedule yours!