Why Do I Need a Postnuptial Agreement in My Orange County CA Marriage?

Usually, a postnuptial agreement is necessary to fix an existing issue within a marriage so that the couple can move forward with a mutual agreement that allows them to work around their disagreement.

Postnuptial agreements are a new area of law, and they can be tricky to understand, create, and execute. It is always a good idea to work with a quality family lawyer so that you can use the law to your advantage and create an effective postmarital agreement.

What is a Postmarital Agreement in California? 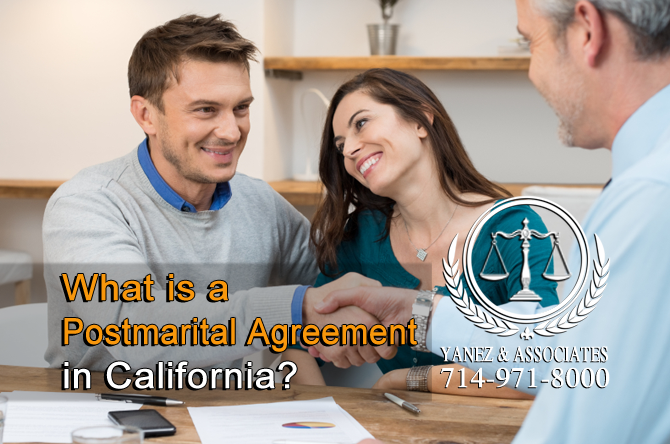 What is a Postmarital Agreement in California and are they legally binding?

A postmarital agreement is a legally binding contract created and entered into by two people who have already married. Usually, a postmarital agreement addresses an issue that has arisen within the marriage, whether it is financial, related to divorce or planning for children, especially those from previous relationships.

Many postnuptial agreements are created when couples realize that they entered into a marriage without working out certain kinks in the relationship, like how to spend money together. A postnuptial agreement can help create terms regarding how much money each partner can spend on specific things, like home decor, sports, or vacations.

While it might seem like couples should be able to work these issues out throughout their marriage, sometimes. Working through these issues together and creating an agreement that both parties understand and can agree to will help the two parties work on their communication skills. It will help them create a very practical and productive way to get through issues that arise in a marriage.

Postnuptial agreements can set specific terms for many issues in a marriage, from how to organize finances to when, where, and how often vacations will be taken to which partner will be stuck with certain chores.

However, there are limitations to a postnup, like there are in a prenuptial agreement. If California law determines that anything in a postnuptial agreement would be unreasonably unfair, it may be up to the law to determine how it would work out instead of the postnup. Postnuptial agreements cannot include any provisions regarding children, from child support to child custody or visitation. These decisions will always be made based on the child’s best interests.

A postnuptial agreement cannot place any regulations on religions or the practice of any religions. 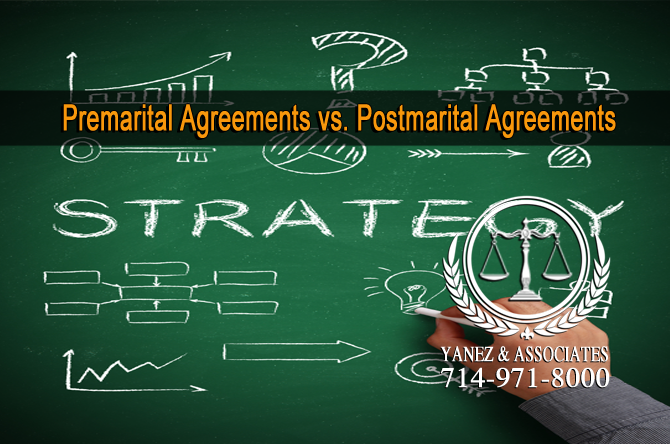 Usually, a premarital agreement is more easily enforceable and is preferred under the law. However, certain circumstances may require a postnup instead, and a postnuptial agreement is usually better than not having an agreement at all.

A prenuptial agreement is usually created before entering into a marriage, and it can be used as a form of insurance in the case of a divorce. Before marriage, all property is separate and lines can be drawn definitively before signing a contract that legally binds two people together.

A postnuptial agreement, on the other hand, is not created or agreed to until after the couple has already married and has community property in addition to the separate property. It can be a way for a married couple to plan in the case of a divorce or the death of one spouse. It can also be used when circumstances change. For example, if either spouse wants to ensure that an inheritance or other separate property is given to a child from a previous relationship instead of to their current spouse in the case of death. It is common to use a postnuptial agreement to protect children from prior relationships from losing financial support.

Why Do I Need a Postnuptial Agreement in My California Marriage? 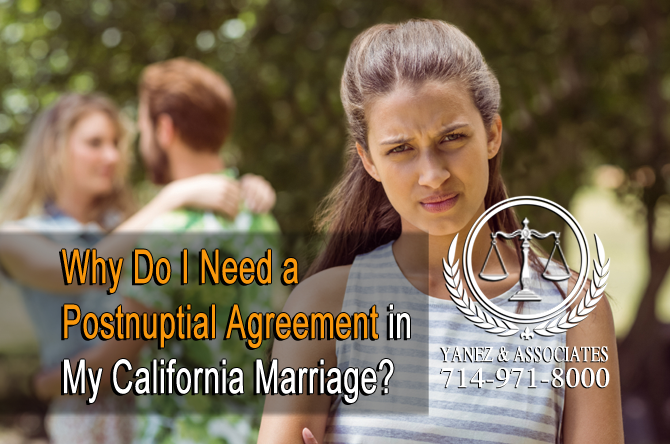 Can I use a Postnuptial Agreement in My California Marriage to protect my children and myself from future unforeseen events?

There are many reasons why a postnuptial agreement can come in handy in marriage in California.

One of the biggest reasons to get a postnup is to protect children from previous marriages or prior relationships. In California, if you are currently married and get a divorce, all of your community property will be divided between you and your spouse equitably. If you wish to set aside certain assets for children from a previous marriage and do not have a prenuptial agreement, a postnuptial agreement can allow you to do this.

A postnuptial agreement can also be a way for a partner to show that he or she is serious about working on the marriage following an unfaithful episode. It cannot punish a spouse for being unfaithful, but it can be used to move forward following an episode of unfaithfulness.

A postnuptial agreement can also be used in cases where two spouses want to stay together and work on their marriage when one partner has an issue with something like gambling or another addiction. Willingness to commit to a legally binding contract like a postnuptial agreement can help demonstrate that one spouse is serious about moving on from a mistake, while providing protection for the other spouse in the case that the spouse in the wrong slips up again.

Postnuptial agreements can also be used to provide financial protection from debt for one partner in the case that the other has accrued a lot of debt.

While creating a postnuptial agreement, it is important for both spouses to consult their own attorneys. However, it is important to remember that even though the cost of creating the agreement can seem high, it is nowhere near as high as the cost of resolving the potential issues that could arise if a postnuptial agreement is not put into place. It is always better to create a postnup as soon as possible, especially when circumstances change.

How Can I Get a Postmarital Agreement in California? 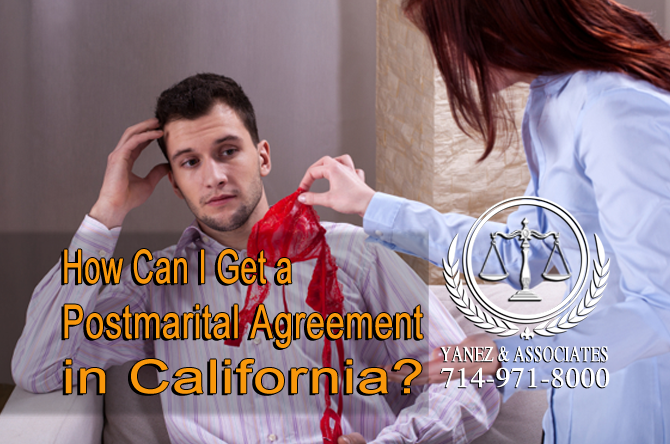 My spouse and I are not agreeing; therefore, we need to explore the options of creating a Postmarital Agreement in California.

Postnuptial agreements are created by the couple involved and their attorneys. Because both parties are on opposing sides of the agreement, it is important to hire separate attorneys and work with them to understand how the law can work in their favor.

In California, a postnuptial agreement needs to meet certain requirements.

First, a postmarital agreement needs to be in writing. The courts can not enforce an oral postnuptial agreement. Both spouses will need to sign the written agreement, and it will need to be notarized.

Like when entering a marriage, it is necessary for both parties to be aware of what they are signing. For a postnuptial agreement to be legally valid, both spouses need to sign the agreement voluntarily. This should be done without deception, threats, or force, and both spouses need to be of sound mind at the time of signing.

The final requirement for all postnuptial agreements is for both parties to disclose all financial information, including all property, assets, and debts.

Postnuptial agreements are one of the newer and more complicated areas of family law in California. It is important to remember that working with an attorney is critical, especially because you will be working both with and against your spouse at the same time when creating a postnup.

It is not necessary to create a postnuptial agreement in any relationship in California. However, there are numerous benefits to creating one, especially if you have children from a previous marriage or if you have a sudden change in circumstances or finances after you have already entered a marriage.

Nobody can force you to enter a postnuptial agreement! It is always important to work with an attorney whether you are trying to create an agreement or your spouse is trying to create one. As a husband or wife, you are entitled to certain things both during and following your marriage, and it is important to understand what your rights are and how to protect them.

If you have questions, contact an attorney. The lawyers at Yanez & Associates are here to help! Contact us today to schedule your free initial consultation.