Find an exceptional Orange County Domestic Violence Lawyer
Should I Represent Myself in My Spousal Support Case in Orange County, California?

Family law related court orders are created in order to allow for all involved parties to understand a fair, legal solution to an existing problem. Common family law court orders that are issued are those regarding child support, child custody, child visitation, spousal or partner support, the division of property and debt, and restraining or protective orders.

When either party fails to follow the terms of the court order, either party (or in some cases a local child support agency) can file a petition to hold the violating party in contempt of court.

Understanding how you can use a contempt of court charge, or how you can defend yourself against an accusation can be useful, depending on your family law situation in California. It can be beneficial to discuss your case with a family law attorney in Orange County, especially when children are involved or when you are the one who is facing charges of contempt.

What Kinds of Court Orders Can be Punished by Contempt of Court? 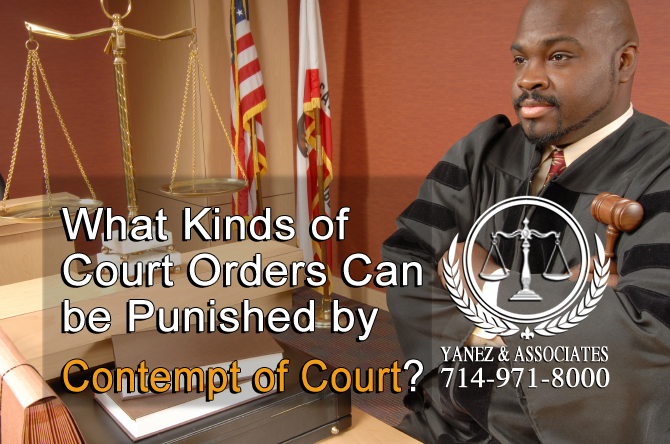 "There are numerous court orders that may require a contempt case to be filed with the court, which Can lead to a contempt."

Several kinds of family law orders may be eligible for punishment through contempt of court in California.

In some cases, like the case of a child support violation, contempt of court may not be the most effective method in addressing the issue. Because contempt of court often leads to additional fines or jail time, both of which can make it more difficult to pay child support, there are other ways to go about correcting an issue where child support is not paid in full, on time, or at all.

The same is true for other kinds of support orders, including spousal support, partner support, and family support. However in all of these cases, if you already have a wage assignment in place and the payer’s employer is not following the terms of the wage assignment, it is possible to take action against the employer. (These cases are most common when the employer and the employee are related.)

Child custody and visitation orders are some of the most commonly violated family law orders in California. However, they are rarely enforced through contempt. There are other ways to enforce a custody or visitation order that may be best used before contempt, but if a parent continues to violate the orders, contempt may ultimately be your best option.

There are numerous other court orders that may require a contempt case to be filed with the court.

Statute of Limitations for Filing Contempt of Court in California 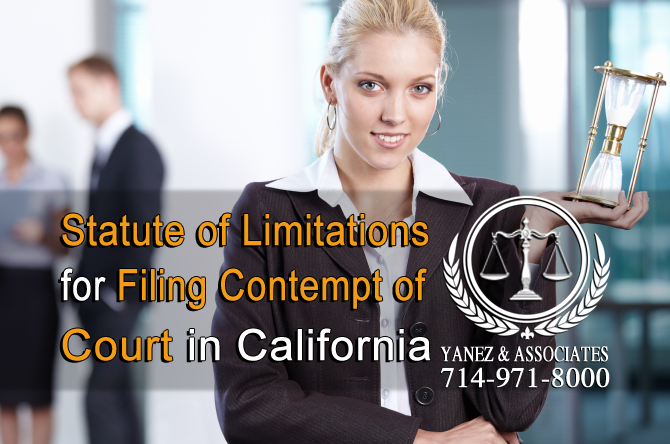 What is the Statute of Limitations for Filing Contempt of Court in California?

In California, a contempt proceeding must be filed no later than two or three years after the alleged contempt has occurred, depending on the type of order that was violated.

For support payment violations, like child support, the statute of limitations is three years for each payment, because each missed payment is considered a separate act of contempt.

For other actions of contempt, the statute of limitations is two years from the date that the contempt allegedly occurred. 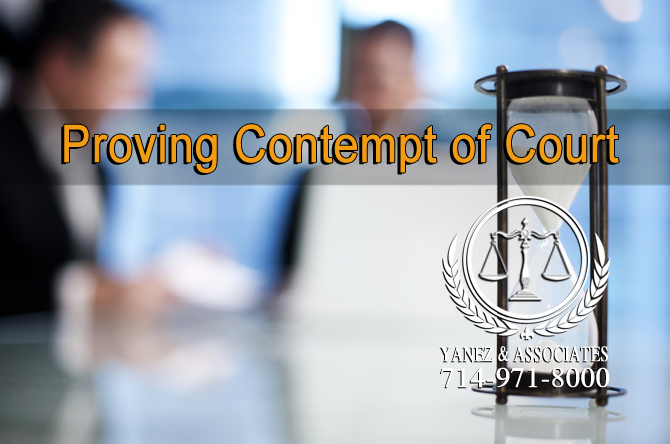 How do I Prove Contempt of Court in California?

In order to successfully hold a person in contempt of a court order, the accusing party must prove the following elements of contempt.

In order to have a valid and legal court order in place, it needs to have been signed by a judge. If you are not sure if your court order is valid and legal, run it by a family law attorney. If you are in the process of creating a court order, make sure to work with a qualified legal professional and go through the courts rather than creating your own agreement so that it can be enforced.

Second, all parties must be aware that the court order exists

Third, the accused party must have willfully disobeyed the terms of the court order

This means that even though the person was aware of the existence of the valid and legal court order, he or she still intentionally violated the terms of the order. In some cases, an inability to pay support, especially if a modification has already been filed, but not finalized, may make this third portion difficult to prove. However, if the accused person is going on vacation or paying other debts, but still failing to make support payments, then he or she is choosing to spend money on things other than the ordered support payments, and therefore willfully violating the terms of the order.

What Happens if I’m Accused of, or Found to be in, Contempt of Court? 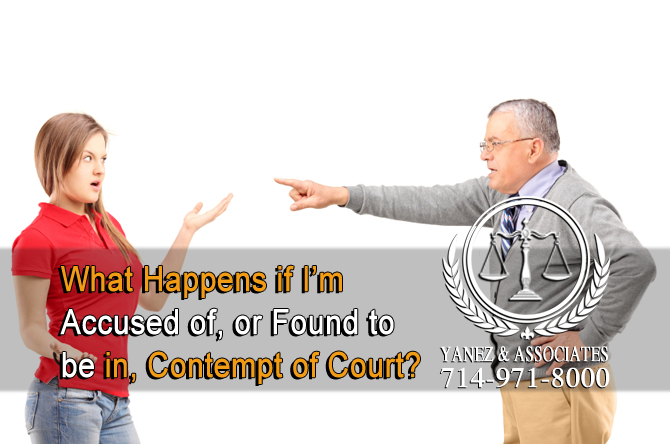 What Happens to me if I am Accused of, or Found to be in Contempt of Court in Orange County?

A person who is accused of being in contempt of court has several rights that should not be overlooked.

If a person is found to be in civil contempt of court, he or she may face a fine of up to $1,000 and/or imprisonment of up to five days for each action of contempt for which he or she is found guilty. This means that each missed support payment, or each violation of a custody order may cost up to $1,000 and 5 days.

Depending on whether this is a first offense, second offense, or beyond, punishments may vary.

For a first offense, an offender will also be ordered to complete up to 120 hours of community service, or to serve as much time in jail. This is the equivalent of five days. Again, this is per action of contempt, so missing three support payments would mean that rather than five days, the person would serve 15 days.

A second offense requires a mandatory 120 hours of community service in addition to 120 hours in jail, per act of contempt.

Any further offense requires 240 hours in jail in addition to up to 240 hours of community service, again, per act of contempt.

In addition, convictions may also require fees be paid by the convicted person.

I need a family law attorney in Orange County to help me with my contempt of court case!

If you are considering filing an action of contempt because you feel it is the best way to enforce a court order, or if you are facing contempt of a court order charges, it is always best to discuss your case with an attorney as soon as you can. The lawyers at Yanez & Associates offer free initial consultations - contact us today to schedule yours!

Find an exceptional Orange County Domestic Violence Lawyer
Should I Represent Myself in My Spousal Support Case in Orange County, California?