So you may be wondering what exactly is expungement? Essentially, expungement is the legal process of having a previously entered criminal conviction dismissed from your record. Though the conviction is not completely erased from your criminal record, a note of conviction dismissal is added, and thereafter you can honestly say that you were not convicted of a DUI. Though having a DUI expunged from your record can be a somewhat lengthy process, expungement comes with a full range of benefits. For example, after DUI expungement you will not have to discuss your offense with employers, because under California’s Labor Code, employers are prohibited from soliciting information about any arrest or detention that did not end in a criminal conviction. 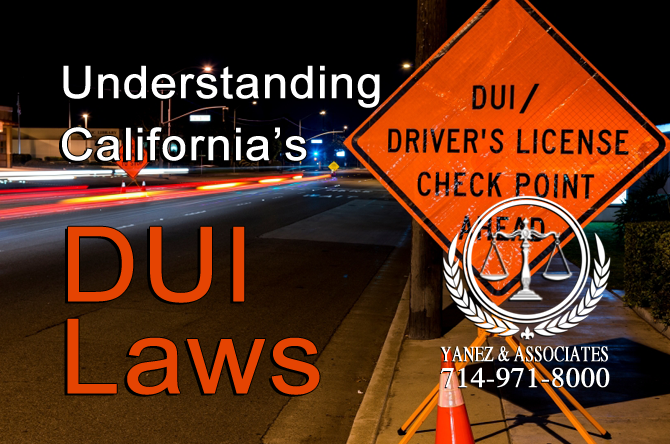 Under California DUI law, it is illegal to have the following BAC percentages while operating a motor vehicle:

Similarly, California’s DUI laws prohibits the operation of a motor vehicle if you consumed any illegal drugs, or consumed excessive amounts of prescription medications, over the counter drugs or any substance containing alcohol.

The severity of a DUI prosecution, conviction and resulting punishment varies depending on the driver’s previous convictions, age and license type. A driver’s first three DUI offenses are typically prosecuted as misdemeanors, thereafter any additional DUI will most likely be charged as a felony. Even prosecution and conviction for your first DUI offense comes with serious penalties and punishment, which could include:

• Immediate drivers’ licenses suspension for a period of at least four months, and a $125 license reissuance fee;
• Jail time of up to six months;
• Fines up to the amount of $1,000, in addition to other penalties, fees and costs associated with the prosecution and conviction process;
• Probation for three to five years;
• The ordered installation of an ignition interlock device; AND
• Mandatory attendance in a court ordered DUI program.

After your first DUI offense the severity of these punishments can increase exponentially, and may even result in a sentence of one year in a California county jail. 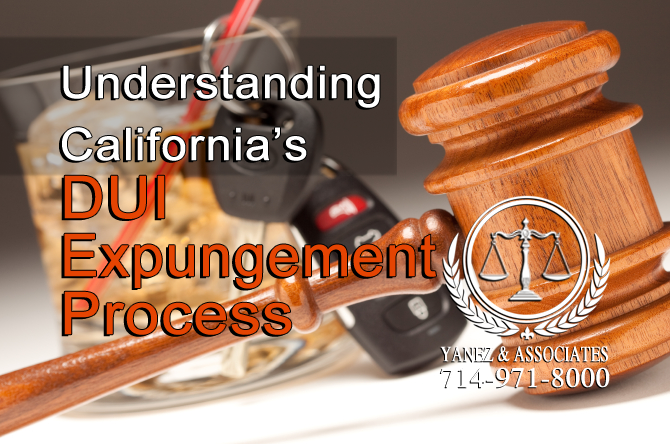 How can I better understand California's DUI expungement process and what Penal Code governs it?

California Penal Code 1203.4 is the law that governs the expungement of criminal convictions. Under this law, convictions for most types of felonies and misdemeanors can be dismissed. Expungement involves the reopening of the original case, and the withdrawal of guilt, and the ultimate dismissal of the case and conviction. Though the original conviction will still appear on background checks that utilize fingerprinting, the conviction will no longer appear on the common commercial background checks that are utilized by landlords and employers. A request for expungement requires the submission of a Petition for Dismissal to a California court.

Am I Eligible for DUI Expungement? 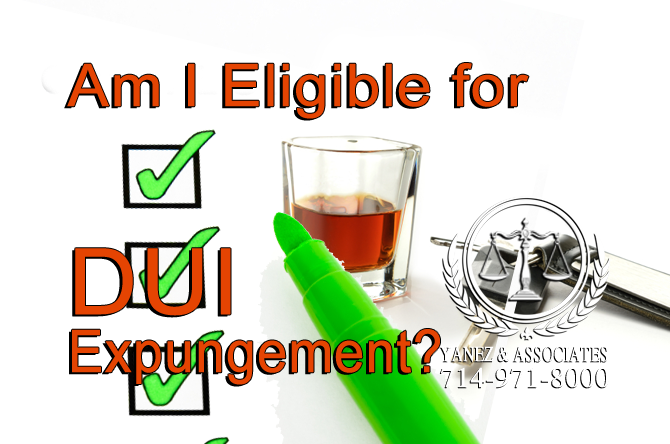 How do I know if I am Eligible for DUI Expungement in Orange County California?

You may also be eligible for a DUI conviction dismissal if you were not sentenced to probation, and:

• You were only convicted of a misdemeanor or infraction, and not a felony;
• A year or longer has passed since your DUI conviction;
• All sentencing requirements have been fulfilled;
• You are not currently being charged for, or serving a sentence for a separate offense; AND
• Since your DUI conviction you have obeyed the law while living an honest and upright life.

Lastly, the California courts have the choice to confirm or approve your Petition for Dismissal in the following situations:

• You were convicted of a DUI under California’s Vehicle Code Section 12810(a)-(e);
• You did not fulfill all of the requirements of your court ordered probation; OR
• You were sentenced to probation and did not obtain an early release.

If your conviction dismissal is left to the discretion of the court, you will only be eligible for expungement if all reimbursements, restitution and fines have been paid, and only if you are not presently serving a separate sentence or probation, and you’re not currently being charged with a different offense.

The successful completion of the DUI expungement process requires adherence to a wide assortment of California laws and statutes. As a result, you will require legal assistance from a trained and licensed California DUI expungement attorney. The legal team here at Yanez & Associates has years of experience with successfully bringing Petitions for Expungement in front of the California court system. Contact us today to discuss how we can deliver the legal services you deserve in your DUI expungement case.