My income has reduced and I can no longer pay my Orange County Spousal support, WHAT NOW?
How to Modify a Family Law Visitation Order in Orange County California

Mothers’ Rights FAQ: What do Mothers' Rights in Orange County California consist of?

All mothers, and all parents, in California have certain rights and obligations when it comes to their children. These rights are usually in regard to child custody, and the obligations, child support. Although historically, it is generally assumed that the mother will have custody of her children and the father will pay child support, these outdated views are not supported by California law.

A Mother’s Right to Child Custody in California 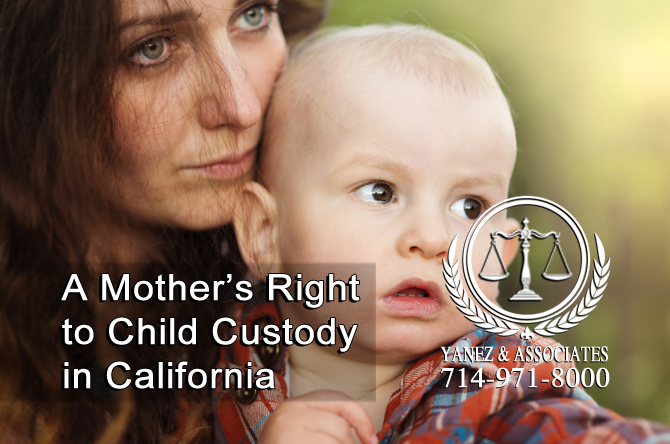 As a Mother, what are my rights when it comes to Child Custody in California?

There are two kinds of custody in California: legal custody and physical custody.

As a mother, you may have the right to both physical and legal custody, depending on your child’s best interests. It is always best to show the court that you can put your child’s needs first, and to work with an attorney who can help you build your case.

Both physical and legal custody may be granted either solely to one parent, or jointly to both parents. A mother has no more or less of a right in California to custody than a father.

A mother may have the right to sole physical custody of her child, if it is determined that this would be in the child’s best interests. This would mean that the child would live with the mother instead of his or her other parent.

Enforcement and Violations of a Physical Custody Order

If, as a mother, you are facing issues with your child’s other parent violating the child custody order that you have in place, you do have the right to enforce your custody order through the courts.

The first time a custody order has been violated, try to work it out with the other parent. If this does not work, you can contact your local police department and ask them to enforce it for you. If you are worried that your child has been abducted by his or her other parent, contact your district attorney and ask for the Child Abduction Unit.

Usually, filing a motion for contempt of court is a last resort, because it results in the harshest consequences. You should discuss this option with an attorney if your child’s other parent is not following the custody order and you have already taken other actions.

Legal custody, like physical custody, can be granted either jointly to both parents, or solely to one parent. As a mother, you have the right to legal custody of your child.

Usually, joint legal custody can be granted only in situations where parents are on good terms and have good communication skills, because only under these circumstances can they work out the decisions they will need to make together.

However, a mother also has as much of a right to custody of her child as a father. It is important to show that you can put your child’s needs first. The court is more likely to grant legal custody to a parent who can put the child’s best interests before his or her own.

Violations of a Legal Custody Order 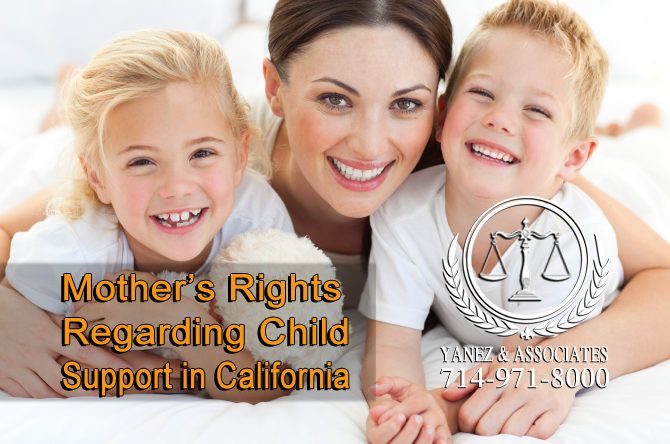 What are my Mother’s Rights Regarding Child Support in Irvine, California?

Every child in California has the right to receive financial support from both parents. This means that a mother is legally obligated to support her child financially according to the California child support guidelines.

If, under the child support order, the mother is receiving child support, she does have the right to enforce that order under California law. This may allow a mother to collect back child support, in addition to interest, and to possibly bring charges against the parent who owes support, who may also face additional consequences.

If a mother is obligated to pay child support, it does not give the father the right to live off of that support, or to become a stay-at-home dad and ask for more support. It is important to present accurate financial information and to work with a family attorney so that a mother can protect herself, her finances, and her parental rights.

I need an Orange County Mother’s Rights Lawyer to explore my options.

A mother also has the legal obligation to support her child financially.

Sometimes, the strongest right a mother has is the right to enforce either a child custody or a child support order. Both orders are made in the best interests of a child, and it is always best for the mother to enforce and promote the child’s best interests.

It is important to work with a child custody attorney when enforcing your rights as a mother. A lawyer can help you understand how the law applies to your case, and how you can use the law to protect your rights.

If you are ready to speak with an attorney in Orange County, contact the lawyers at Yanez & Associates today to schedule your free initial consultation.

My income has reduced and I can no longer pay my Orange County Spousal support, WHAT NOW?
How to Modify a Family Law Visitation Order in Orange County California