Having a criminal record can negatively impact your ability to obtain viable housing and employment. Most people assume that their criminal record will stay with them for their entire life. However, the reality is something different. The State of California provides a criminal record expungement process so that certain eligible individuals can move on with their lives, while no longer having to live with the social stigma that comes with having a conviction on their criminal record.

Your eligibility for expungement depends on whether you were convicted of an infraction, misdemeanor or felony. Your ability to obtain expungement may be dependent on whether you fulfilled all of the terms of sentencing, which could include probation, jail time and the payment of all fines, reimbursements and restitution. Furthermore, the location where you were arrested and convicted can also affect which expungement options you can access. 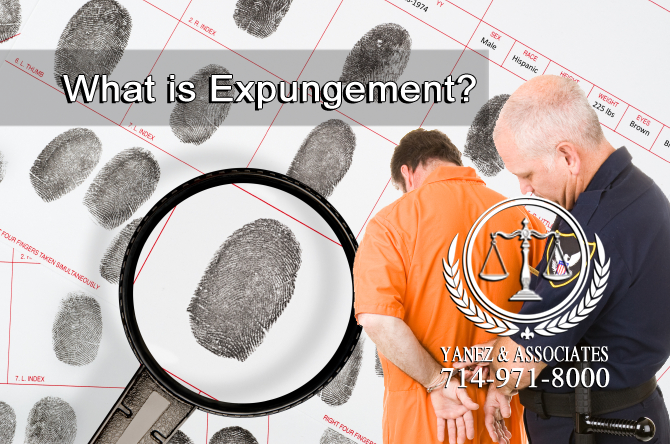 What is Expungement in California?

To “expunge” is defined as the act of erasing or blotting out. Essentially, an expungement in legal terms is the official process of dismissing a previously entered criminal conviction. The use of the term “expungement” can be somewhat misleading. This is because the process does not completely “erase”, or “blot out” your pre-existing criminal record. Instead the expungement process is used to dismiss certain specific convictions from your criminal history. Though court records will still reflect the original conviction, completion of the expungement process will result in an additional note being added to your criminal record that states that the original conviction was subsequently dismissed.

The term “expungement” means different things based on the location where your conviction occurred. While in certain states expungement automatically results in the complete sealing and destroying of an applicable conviction record, here in California, the complete sealing and destroying of criminal records is extremely rare and will be based on the specific circumstances of your past convictions and arrests.

Your ability to have a conviction expunged from your criminal record depends on the specific laws that govern your criminal conviction(s). As a result, the expungement process typically requires assistance from a trained and licensed California expungement attorney. This is because depending on the laws in play you may be eligible for a conviction dismissal, a conviction reduction or maybe even a pardon. 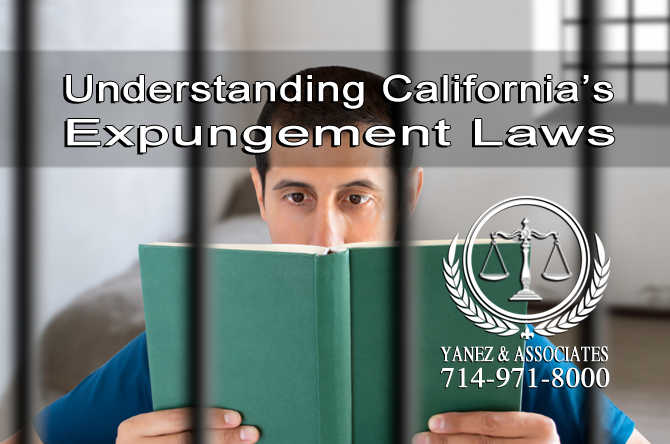 In order to request that the California courts to expunge your infraction, misdemeanor or felony, a Petition for Dismissal must be submitted under section 1203.4 or section 1203.4(a). You will not be eligible for a conviction dismissal if you were sentenced under the Department of Corrections and Rehabilitation’s authority, or were sentenced to serve time in a California state prison. Furthermore, when it comes to conviction dismissal there are circumstances where you are automatically eligible for a dismissal, while in other circumstances it is completely in the court’s discretion to approve or deny your Petition for Dismissal.

The following conviction circumstances allow you to be automatically eligible for conviction dismissal:

• You were sentenced to, and successfully completed probation, or you were sentenced to probation and were approved for early release;
•  You’ve already paid all reimbursements, restitution and fines that were ordered as a part of your criminal sentence;
• You are not presently on probation or serving another sentence for a different offense; AND
• You have not been charged with another offense following the conviction you are petitioning for dismissal.

Those who were not sentence to probation are also automatically eligible for a conviction dismissal if:

• Your conviction was not a felony, and was only an infraction or misdemeanor;
• At least one year has passed since your date of conviction;
• Your have fulfilled all sentence requirements imposed by the court;
• You are not presently being charged for a different offense, and are not presently serving a sentence for a different offense; AND
• Since the time of your conviction you have lived an upright and honest life, while obeying the law.

• You were convicted of a California Vehicle Code Section 12810(a)-(e) offense;
• You were sentenced to probation and did not obtain an early release; OR
• You did not fulfill all of the requirements of your probation sentence.

In circumstances where the court has the discretion to approve or deny your Petition to Dismiss you must also:

Convictions Not Eligible for Expungement Dismissal 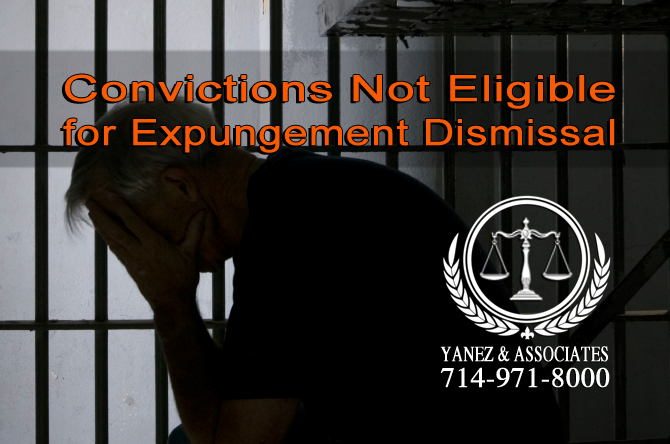 What Convictions are Not Eligible for Expungement Dismissal in California

Convictions for the following offenses are not eligible for expungement dismissal under California law: 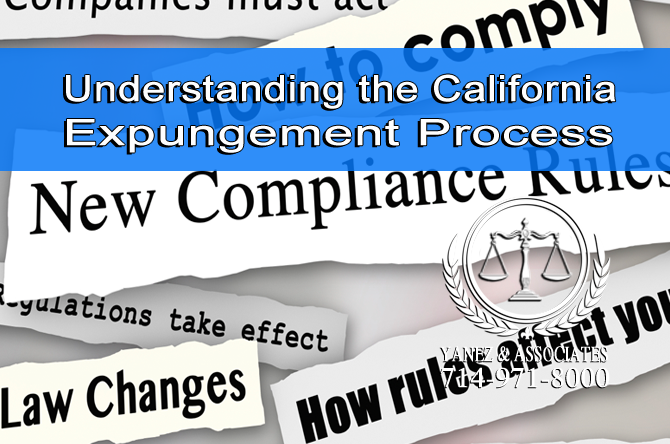 The State of California has a relatively simple expungement process in place. However, given the complexity of the different laws and regulations involved, legal assistance from a trained and license California expungement attorney will make this process easier to complete then if you attempted to submit an expungement petition on your own.

Your first step is to locate your complete criminal record. Doing so will allow you to understand what offenses are on your record in order to determine which specific convictions can be expunged. Collect and review any official legal documents that you received at the time of your arrest and conviction. If these original documents are not available, you can obtain your criminal record from a California County Superior Court office, or the California State Department of Justice, Criminal Record Review Unit.

Your second step is to review your criminal records for certain specific information, including:

• Plea and/or conviction dates;
• The docket number of your previous case;
• The legal code name and section that you were convicted under;
• The official plea or verdict that you entered;
• Proof of reimbursement, fine and/or restitution payments that you made as required by your court sentence;
• The terms and length of your informal or formal probation order, including the date that your parole began and ended;
• Prison sentencing documents, including your release and sentencing dates; AND
• Any other relevant sentencing documents related to your conviction.

Your third step will be to determine whether you are eligible to have your conviction dismissed. As previously noted you are only eligible for expungement if your were convicted of a misdemeanor, infraction or felony that did not result in a state prison sentence, and was not the result of a sentence granted under the authority of California’s Department of Corrections and Rehabilitation. You may be eligible for expungement even if as a result of your conviction you were sentenced to probation, a fine, county jail time, or a combination of all of these three punishments.

Having Your Criminal Arrest or Juvenile Record Sealed and Destroyed 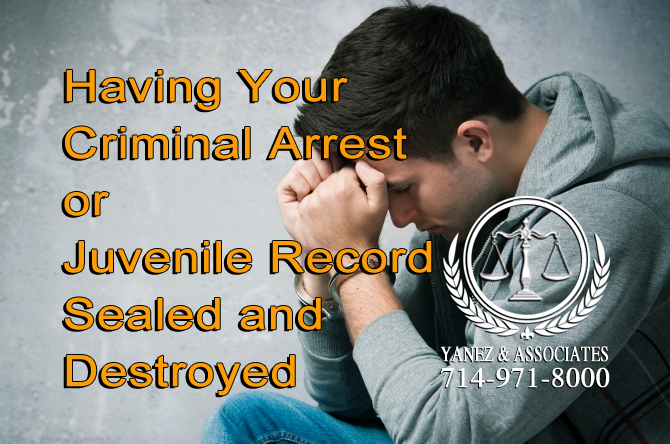 Want to Have Your Criminal Arrest or Juvenile Record Sealed and Destroyed in OC California?

While criminal convictions cannot be completely erased from your record, certain criminal arrests records can be sealed and destroyed in specific situations.

For example, after your 18th birthday you can file a petition with the California courts to have your juvenile criminal record sealed. This sealing means that no person can view or gain access to your juvenile record. Furthermore, five years following the sealing date, your juvenile record will be completely destroyed, and it will be as if it never existed.

You can also petition the California courts to seal and destroy certain criminal arrests that resulted in charges being filed. However, this avenue for relief is only available if the action against you was ultimately dismissed, and you were determined by a court to be factually innocent of the crimes you were accused of committing.

It is important to note that a few very specific convictions and criminal activities are automatically deleted from your criminal record after a certain period of time has passed. Convictions for possession of marijuana for personal use are automatically erased from a criminal record after two years from the time of conviction has passed. However, all other marijuana possession convictions are not granted this automatic expungement. Similarly, if you were referred to a “diversion” program ie. an alternative to traditional criminal prosecution, an automatic dismissal will be granted if you successfully completed and fulfilled all of the diversion program’s requirements.

Given the specificity of the above circumstances, it is important to consult with a legal professional to determine whether or not your criminal activities are subject to an automatic expungement.

The Effects of Having Your Expungement Petition Approved 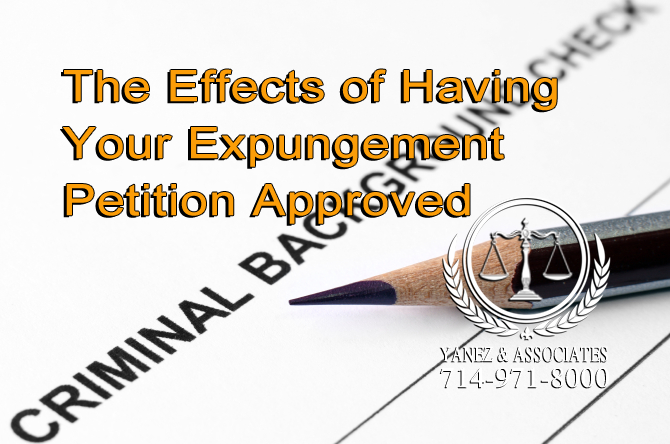 What are the Effects of Having my Expungement Petition Approved

An Alternative to Expungement 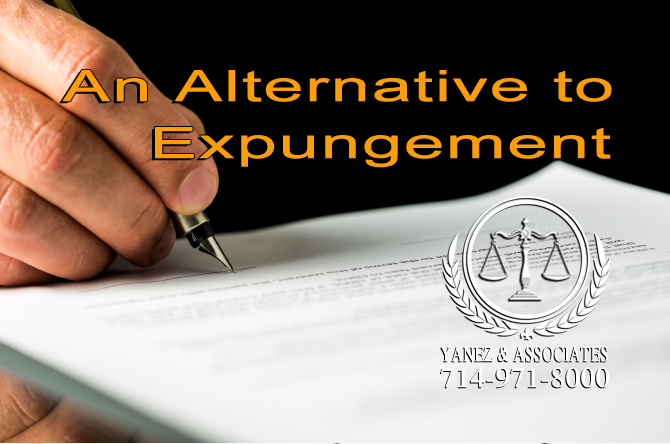 What is an Alternative to Expungement in California

Don’t fret if you are ineligible for dismissal under sections 1203.4 or 1203.4(a). You may be eligible to receive a Certificate of Rehabilitation and Pardon if you were either sentenced to serve time in a California state prison, or if you were sentenced under the authority of California’s Department of Corrections and Rehabilitation.

Though a Certificate of Rehabilitation will not remove your convictions from your criminal record, it will restore certain political and civil rights of citizenship. This petition must be filed at the California Superior Court of your residency, and approval typically requires assistance from a licensed attorney given the complex legal processes at play.

Navigating California’s expungement process on your own can be stressful and time consuming. In addition to having to determine whether your conviction is eligible for some form of expungement, you may also need to craft a detailed Petition for Dismissal to be submitted to the California courts. This requires an in-depth understanding of an assortment of complex state and local laws. Luckily, our criminal record expungement attorneys in Orange County, California have the legal skills and acumen required to submit and defend your Petition for Dismissal. Give us a call today to discuss all of the legal services and solutions that that Yanez & Associates can provide in your criminal record expungement case.