Awarded joint custody cannot see child what is my recourse?

What should I know about ex-partes before requesting one in Irvine CA?
Does Religion Enter into the Determination of Child Custody in Orange County, California?

I was Awarded Joint Custody in OC California, but my Ex-Spouse will Not Allow me to See my Child. What is my Recourse?

Awarded joint custody cannot see child what is my recourse? If joint custody has been awarded to you and your ex-spouse, your child legally lives with both of you for some of the time. In the case that your ex-spouse is preventing you from spending time with your child at all, it is considered a violation of your custody order.

One of the benefits of having a legal, court issued custody order is that it can be legally enforced.

If your child’s other parent is not following your custody order, you have several options.

First, you have the option of contacting your local police department and requesting that they enforce your custody order.

If you do not know where your child is or are not allowed to see him or her, you can contact your local district attorney and ask for assistance from the Child Abduction and Recovery Unit.

Your final option, and the most serious action you can take, is to file a contempt of a court order case with your local court. If your child’s other parent is found to be in contempt of a child custody order, he or she can face serious consequences, and it is likely that you will be able to spend time with your child. However, proving a contempt case can be difficult and it is best done with the assistance of a skilled California child custody attorney.

Contempt of a Child Custody Order in OC California 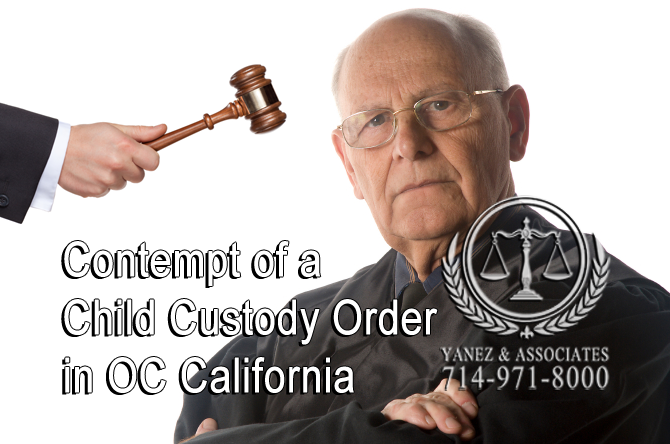 Contempt of a court order in California can be either a civil offense or a criminal offense. In order to hold your former spouse in contempt of a custody order, the burden of proof is on you and your attorney. You will need to show the following three in order to show contempt.

Contempt of a court order in California can be either a civil offense or a criminal offense. In order to hold your former spouse in contempt of a custody order, the burden of proof is on you and your attorney. You will need to show the following three in order to show contempt.

In order to show that a custody order has been violated, it needs to first be proven that the custody order exists, and that it is a legally signed and valid document. If you have a custody order through the courts that is currently valid, this shouldn’t be an issue. Custody agreements between you and your child’s other parent that have not been court approved are not legally enforceable.

If you do not have a custody order in place, and your child’s other parent refuses to let you spend time with your shared child, your first step should be to file a custody case with the court so that you can establish a legally valid and enforceable custody order.

The other parent has knowledge of the custody order’s existence.

This can be complex in cases where the court order was not served upon the other party, especially if that parent was represented by an attorney in the child custody case.

The other parent has willfully violated the custody order.

Make sure to continue fulfilling your obligations regarding child support and child custody. Just because the other parent is not fulfilling child custody obligations does not give you the right to skip out on child support. If you fail to show up at meeting places or to be available during times that you should be spending with your child, you are just as guilty as your former spouse is for violating the custody order.

What if the Child is Refusing to Spend Time with Both Parents? 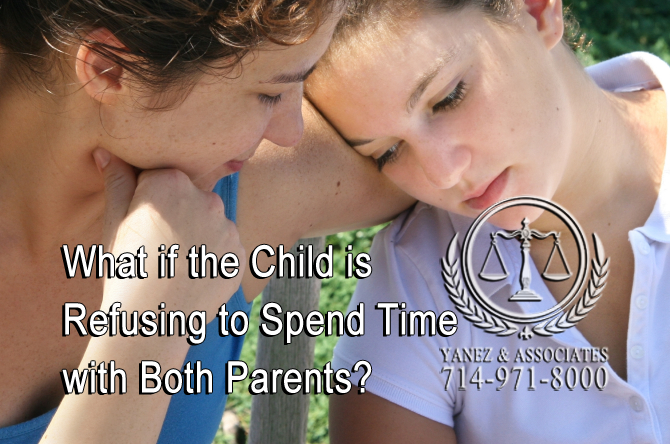 Often this situation can vary depending on the age of the child. If a five year old does not want to spend time with you out of the blue, there is likely something else going on. It may be undue influence of the child by the other parent, or it might be due to one parent failing to spend time with the child prior to the introduction of a new custody order, or a modified custody order.

If the child is not comfortable with the parent, perhaps spending time with both parents, or another trusted adult at the same time could help. If one parent is influencing the child’s decision not to spend time with the other parent, a custody modification may be in order. Intentionally harming a child’s relationship with the other parent is not in the child’s best interest, and can warrant a change in custody.

If the child is older and chooses not to spend time with the other parent, it can be difficult to enforce the custody order, but it can be done.

Discuss your case with a child custody attorney who has experience with contempt of court order cases in California. Contact the attorneys at Yanez & Associates today to schedule your free initial consultation.

What should I know about ex-partes before requesting one in Irvine CA?
Does Religion Enter into the Determination of Child Custody in Orange County, California?