Can I lose custody of my children if I have been charged with domestic violence?

What is the difference between Divorce and Legal Separation in Orange County California?
How will the Age of a Child Play a Role in my Custody Agreement in Orange County?

Can I lose custody of my children if I have been charged with domestic violence?: Abuse can be physical, mental, emotional, financial, or sexual. Domestic abuse occurs between people with an existing relationship, including the following:

• People who have been in a romantic relationship, like spouses, boyfriend and girlfriend, or domestic partners,

• People who currently or formerly lived together,

• People who are related either by blood or by marriage,

• People who have children together, or

The most important part of any child custody arrangement is that it is made in the best interest of the child.

If one parent has been convicted of domestic violence, or has been abusive towards either the other parent or the child, it is important to have a child custody arrangement in place that protects both the parent and the child.

However, this does not mean that a parent who has previously been accused of or charged with domestic violence can never have custody of, or visitation with a child. 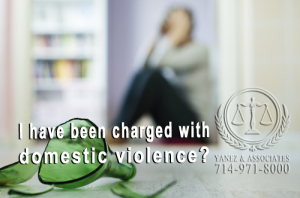 I have been charged with domestic violence in Orange County, now what?

Determining that a Parent has Committed Domestic Violence

If a judge determines that there is domestic violence involved in a custody case, there are specific laws to follow regarding child custody and visitation rights of parents who have been convicted of domestic violence.

A custody and visitation case is considered to involve domestic violence if either of the following conditions have been met:

• A parent has been convicted of domestic violence against the other parent in the last five years, or

• A court has determined that a parent has committed domestic violence against the other parent or the child in the last five years.

When a request is made for a domestic violence restraining order, the process begins with a temporary order that lasts until the first court date. This temporary order can prevent the restrained person from having custody of the child, spending time in the family home or vehicle, or being within a distance of places that the rest of the family frequents.

Once a hearing has been held, a judge can issue a permanent or long term restraining order that can last up to five years. This restraining order, like the temporary order, can also disallow child custody and visitation, but require child support. 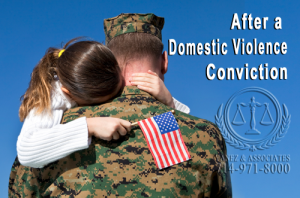 Placing a child in a home where domestic violence occurs can be detrimental to a child, according to the State of California. In most cases, an abusive parent, or a parent who has committed domestic violence cannot be awarded either joint or sole custody of a child in California. However, the parent could still be awarded visitation rights, usually in the form of supervised visitation.

If a judge believes it is not in the child’s best interest to be in the custody of a parent who has committed domestic violence, the judge has to apply a rebuttable presumption.

• The parent must prove to the court that awarding either joint or sole custody to this parent is in the best interest of the child;

• The parent has successfully completed a one year batterer intervention program;

• The parent has successfully completed a parenting class, if it has been ordered by the court;

• If the court has ordered it, the parent must have successfully completed substance abuse counseling;

• If the parent is on probation or on parole, he or she must have complied with the terms of his or her probation or parole;

• The parent cannot have committed any more acts of domestic violence. 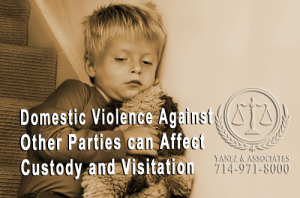 Domestic Violence Against Other Parties can Affect Custody and Visitation

Domestic Violence Against Other Parties can Affect Custody and Visitation

When creating a child custody order for a child, a judge must consider domestic violence that has occurred between a parent, and any of the following people in the parent’s life.

• Any child who is related to the parent through blood or marriage,

• Any child for whom the parent was responsible at any time,

• The child’s other parent,

• The parent’s parent, spouse, fiancé, fiancée, girlfriend, boyfriend, roommate, or any other person seeking custody of the child.

The Effect a Domestic Violence Conviction can have on Visitation Rights 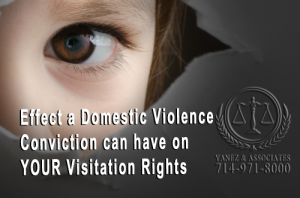 Effect a Domestic Violence Conviction can have on YOUR Visitation Rights

Usually, this means that a California court will only allow a child to spend time with a parent who has committed domestic violence under supervision of another adult, the other parent, or a professional. The judge may also choose to disallow overnight visits.

If a protective order has been issued, a court may disallow visitation rights with the abusive parent altogether.

The experienced family law attorneys at Yanez & Associates have successfully handled divorce cases, domestic violence cases, restraining orders, child custody cases and child visitation cases. Contact us today to schedule a free, initial consultation where we can discuss the specifics of your case, and help you obtain the best child custody order for your children.

Can you lose custody of your children if you have been charged with domestic violence in Orange County or Los Angeles?

What is the difference between Divorce and Legal Separation in Orange County California?
How will the Age of a Child Play a Role in my Custody Agreement in Orange County?