Can a Separated Unmarried Mother Move Away from California without the Father’s Permission?

I was just served with an ex-parte in Orange County CA
In California Can I Terminate the Father’s Rights Prior to the Birth?

FAQ: Can a Separated, Unmarried Mother Move Away from California without the Father’s Permission?

Can a Separated, Unmarried Mother Move Away from California without the Father’s Permission?Any mother has the legal right to move away at any time. However, the way that her child custody rights will be affected can vary depending on the custody order in that is in place when she chooses to move.

There are many reasons that a mother may want to relocate; any parent who wishes to relocate with children will need to modify the existing custody agreement, especially if taking the children on the move is important.

Moving Away with Sole Custody from OC California 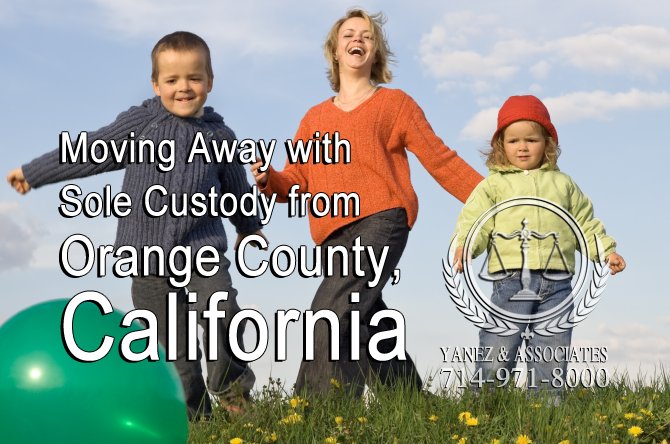 If a mother wishes to relocate and she has a custody order in place stating that she has sole legal and physical custody of a shared child, the burden lies with the noncustodial parent to prove that the move would harm his or her relationship with his child.

If a mother wishes to relocate and she has a custody order in place stating that she has sole legal and physical custody of a shared child, the burden lies with the noncustodial parent to prove that the move would harm his or her relationship with his child.

When one parent is granted sole physical and legal custody, it means that that parent has the right to make important decisions for the child, and that the child lives with that parent. The other (noncustodial) parent may or may not have the right to visitation with the child.

The type of visitation order may also affect the parent’s chance to move away, as well as how far away the custodial parent wants to move the child from the noncustodial parent.

As a custodial parent with sole custody who is attempting to move away with your child, consider the following helpful hints.

• Make sure that the motivation behind your move is for you and your child, and not out of spite for the other parent. Intentionally affecting the other parent’s parenting time will not look good in the eyes of the court.
• Give the noncustodial parent as much advance notice as possible of your move. Make sure that if there is a legal issue regarding your case, you will have time to complete it prior to the move.
• It may help to come up with a proposed modification to your custody or visitation agreement that would allow the noncustodial parent to spend time with the child or to stay in contact with the child. Paying for transportation, scheduling regular Skype or phone visits, or offering to host the noncustodial parent may help.
• If you have questions or you are worried about the outcome of your case, discuss your options with a qualified child custody lawyer.

Moving Away with Joint Custody from Orange County CA 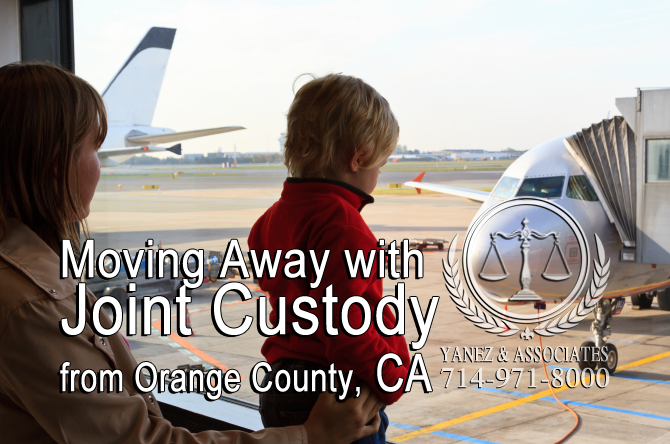 When two parents have joint physical and legal custody of a child, it means that the court has decided that it is in the child’s best interest to live with both parents for some of the time, and for both parents to make decisions for the child’s life. This can be one of the most difficult situations for a mother to move away with a child.

If a parent wishes to move with a child and currently has a joint custody agreement, the current custody agreement will need to be modified. It is unlikely that when two parents live in different states that they will be able to have joint custody of a child, so the new custody order will likely give sole custody to one parent, and allow for visitation with the other parent.

When it comes to determining a new custody order, the court will base its decision on the best interest of the child. This can depend on several factors.

• How far the parents will live from one another, and where the mother wishes to move - Keep in mind that the farther you move, the more the custody order will need to be modified.
• The child’s ties to his or her current community - Older children are harder to move, because they have more ties to their existing community.
• The reason for the move - Moving to spite the other parent makes it less likely that you will be able to take the child. Moving for a new marriage or a new job may be in the child’s best interest.
• The child’s age - Younger children need more time with both parents, but are less likely to have strong ties to their community. Older children are more likely to have an opinion on their own custody agreement, can travel more easily between their parents, and are more likely to have ties to their community.

Every child custody case is different, and it is important to discuss your case with a qualified custody lawyer in California. You’ll need to make sure that a custody agreement is valid and legal, so it can be enforced in various states, and build the best case possible based on your existing custody order.

Contact the attorneys at Yanez & Associates to schedule your free initial consultation.

I was just served with an ex-parte in Orange County CA
In California Can I Terminate the Father’s Rights Prior to the Birth?

California Child Custody
Bettina Yanez
Comments are closed
0
Can a Separated Unmarried Mother Move Away from California without the Father’s Permission?, Can I move away from CA with my son without his father's written permission, Can the other parent take my child from CA, Do I Need the Other Parent's Permission to Move Out of OC CA, Move Away Orange County Child Custody Lawyer, Moving Away with Joint Custody from Orange County CA, Moving Away with Sole Custody from OC California, Rights and Responsibilities of Unmarried Parents in OC CA, Tips for Unmarried Parents who Want to move away from OC California