How to Defend Yourself against False Accusations of Domestic Violence in Orange County, California

How does divorce mediation work in California?
My OC Spouse Falsely Accused me of Child Abuse; Do I need an Attorney for my Defense?

How to fight false allegations of domestic abuse in Orange County, California

How to Defend Yourself against False Accusations of Domestic Violence if you have been accused of domestic violence in California, whether the accusations are true or false, you need to consult with a criminal defense attorney who also has experience in family law.

Potential Consequences of a Domestic Violence Conviction in California 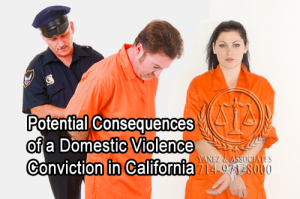 Do you know the Potential Consequences of a Domestic Violence Conviction in California?

If you fail to contact a quality criminal defense attorney, the allegations against you could lead to serious consequences. Domestic violence allegations can lead to both civil and criminal consequences. Criminally, you could face charges of assault and battery, and you may face fines or jail time.

Civilly, your consequences can include the following:

How to Handle False Allegations When You Are Outside of Court 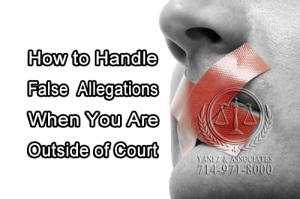 Do YOU KNOW How to Handle False Allegations When You Are Outside of Court?

In addition, watch your words carefully. If you can spend time with your children during the legal process of defending yourself, do not make jokes that could be taken the wrong way, or rough house with the children. It is in your best interest at this point to always have another adult present when you spend time with the children so that you have a witness who can speak on your behalf. Do your best to maintain positive relationships with your children.

Hire a qualified lawyer. Don’t assume that the charges will just go away. Even if you are innocent, it is better to have a quality defense attorney on your side. If you have questions or concerns, you attorney will be there to assist you. Try to appreciate that the court does not know you, and it is their job to investigate all allegations of child abuse and domestic violence in order to protect the community. 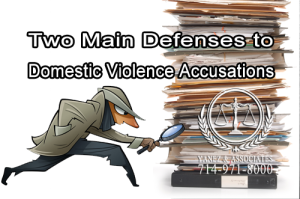 What are Two Main Defenses to Domestic Violence Accusations

The two main ways to defend against false accusations of domestic violence are to prove that the prosecution has not proven your guilt, or to offer a defense that proves innocence.

Show That Guilt has not Been Proven

If you or your attorney can show that the actions taken were in self defense, then the initial instigator is the prosecution, or the supposed victim. Or, you may have an alibi, or some proof that you are innocent, whether or not the act occurred. In this case, it is your best option to contact a defense lawyer.

If you are facing charges of domestic violence, always contact an attorney. At Yanez & Associates, we have attorneys that are experienced in both family law and criminal defense. If you have been accused of domestic violence, do not hesitate to contact us. Schedule your free initial consultation today.

How does divorce mediation work in California?
My OC Spouse Falsely Accused me of Child Abuse; Do I need an Attorney for my Defense?