Factors Considered for Custody and Visitation in OC CA

How Does a Criminal Domestic Violence Case Impact Custody and Visitation in California Family Court?
Steps to Get Custody of my Children in OC California

What Factors are Considered for Child Custody and Visitation in California?

Factors Considered for Custody and Visitation in OC CA. If you and your spouse cannot agree on a custody and visitation schedule on your own or through child custody mediation, the court can create a child custody order for you.

A custody and visitation order determines how much time a child spends with each parent, and with which parent the child will live - this is called physical custody. They also list which parent will make important decisions about the child’s life, especially those regarding health care, religion, education, etc. This part is called legal custody.

All child custody orders are created based on the best interest of the child in question. If you choose to create your own custody order, you need to consider certain factors in so that the judge will approve it. In order to tailor your child custody and visitation order to your family situation, the court needs some information about you, your child, and your child’s other parent.

Generally, the court will consider the following factors when determining child custody.

• The child’s health and safety with each parent

• A history of abuse or violence, or issues with drug abuse can negatively affect a parent when it comes to spending time with the child.

• The parent’s ability to co-parent

• Both parents should encourage the child’s relationship with the other parent. Parents with good communication skills and co-parenting skills will likely have a less restrictive custody and visitation order.

• Specific information about the child

• The child’s age, his or her relationship with both parents, the child’s ties to the community, and more can be factored into child custody orders.

• Specific information about the parents

• The distance the parents live from one another, their abilities to parent the child and protect the child’s best interests, etc.

The Needs of Children at Different Ages

A parenting plan needs to meet a child’s basic needs, including those for love, protection, guidance, nourishment, health care, rest, and more. As a child grows and develops, these needs may change. A child custody and visitation agreement should be changed every two to three years so that it adapts to the child’s changing needs.

Children Three and Under 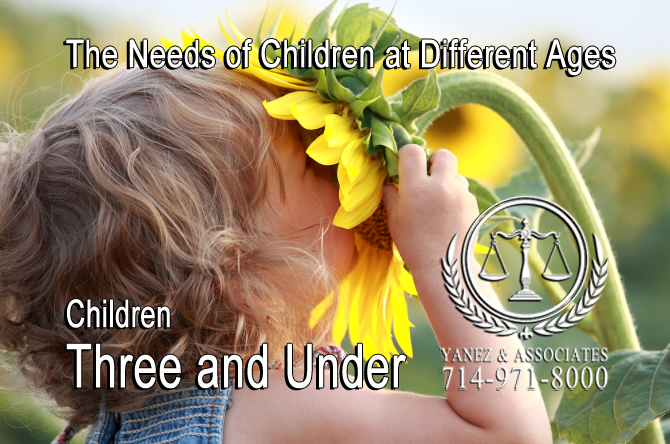 During and following a divorce, young children have specific needs that should be met by a custody and visitation plan.

Children under three years old need to spend time with both parents frequently. However, if the child is young enough that he or she does not sleep through the night, it’s best to remain with the custodial parent overnight.

Children From Three to Five Years 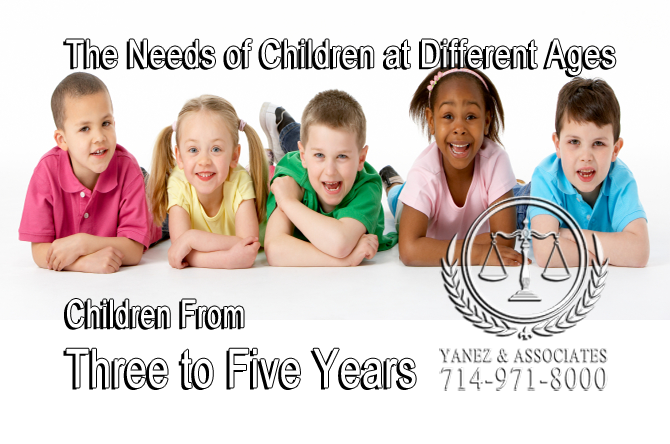 As the child grows into a toddler and a young child, his or her needs will change. The child will still need to spend time with both parents as trust is built and the child’s world expands to include activities outside of the home, like day care, preschool, and friendships. It is important to keep some routine so that the schedules regarding outside activities and spending time with both parents can be predictable to the child.

Children at this age need a role model. It is critical for both parents to respect and support each other, and to keep similar routines at both homes.

If parents are divorcing while a child is between six and 11 years old, the child can begin to understand what is going on. The parents need to reassure the child that the divorce is not his or her fault, and a custody and visitation order needs to emphasize stability and routine.

It is still important for a child to spend time with both parents at this age, and learn to trust that even when one parent is not around, he or she will return and can be trusted to be dependable.

While children are in school and expanding their social circle and outside activities, they should still maintain regular, dependable schedules. 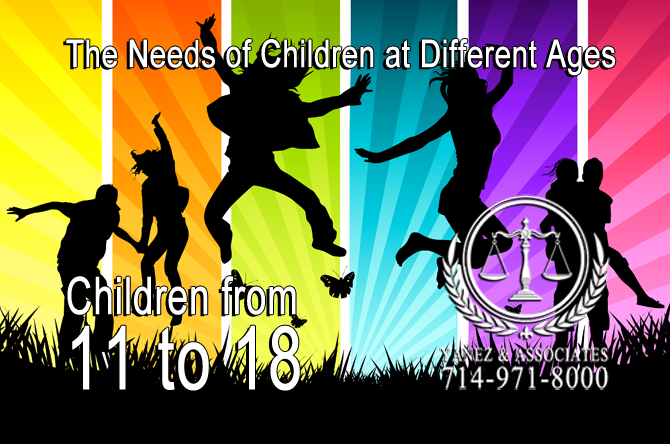 Parents of teens are likely to face struggles no matter what the family situation may be...

As children enter puberty, they may need encouragement to continue communicating with both parents, and they need to feel that they have a safe space in which they can do so. Usually, by now, the child will spend most of his or her time with one parent.

By 14, a child’s opinion is usually considered in the custody agreement. If your child has an opinion, you should take it into consideration, but the child does not get to determine his or her own agreement.

Parents of teens are likely to face struggles no matter what the family situation may be. Children at this age are the most independent they have ever been, and they are likely to spend less time with either parent than ever before.

It is still important to ensure the child has a safe place where he or she can share feelings with both parents.

For more on Factors Considered for Custody and Visitation in OC CA, contact the Child Custody Lawyers of Yanez & Associates in Orange, California

An attorney can provide you with legal advice that applies specifically to your situation. Contact the attorneys at Yanez & Associates to schedule your free initial consultation today.

How Does a Criminal Domestic Violence Case Impact Custody and Visitation in California Family Court?
Steps to Get Custody of my Children in OC California