What are Common Terms I Should Learn for my Child Custody Case in Orange County, CA

What is Supervised Visitation in Orange County California?
What if Child’s Best Interest does Not Coincide with Parents Desire

What are some Common Terms I Should Learn for my Child Custody Case in Orange County, California?

When you get into a child custody case in Southern California, you will likely run into a lot of unfamiliar terms. While a great attorney will make sure that you understand what all of the child custody terms mean, it never hurts to have a little bit of background information.

To help prepare you for your custody case, we have put together a list of some of the terms you are likely to encounter. 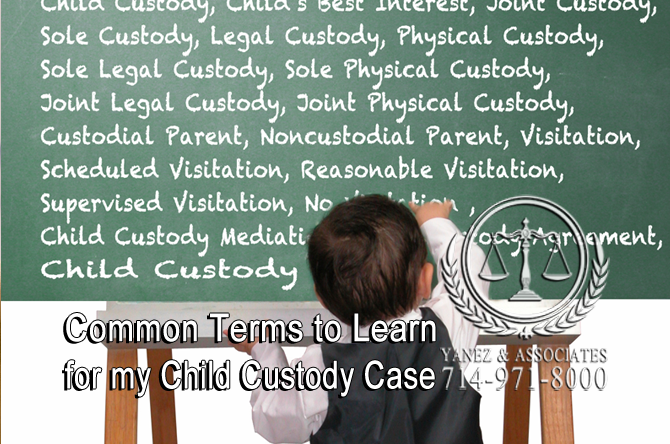 Here is a list of common Terms every parent should know when it comes to their Child's Custody Case in Orange County, CA

Child Custody - This term refers to the legal relationship between a parent and his or her child. Having custody of a child means that a parent has the right to spend time with a child, a duty to care for the child, and the right to make decisions for the child until he or she is 18 years old, or has graduated from high school at 19 years old.

Joint Custody - This simply means that custody of a child has been awarded to both parties in a custody dispute. If joint custody is awarded, the child will live with both parents for part of the time. Usually, the child spends slightly more time living at one parent’s home than at the other parent’s home.

Legal Custody - Legal custody refers to the right to make important decisions regarding a child’s life. These decisions usually include things regarding the child’s education, health care, extracurricular activities, religion, and how the child generally spends his or her time.

Physical Custody - Physical custody refers to where the child spends his or her time. A child lives with a parent who has physical custody.

Joint Legal Custody - When a judge awards joint legal custody, both parents share the right to make important decisions for the child. This usually works best when the parents are on good terms with one another, have good communication skills and both have the child’s best interests at heart.

Joint Physical Custody - When a judge awards joint physical custody, it means that the child will live with both parents some of the time. Neither parent needs visitation rights, because the child already spends time at both parents’ homes.

Visitation - When one parent is awarded sole custody, the non custodial parent usually has a right to spend time with the child through visitation.

Scheduled Visitation - This is one type of visitation order that can be issued. It lists specific times, dates and places that the child will spend time with the noncustodial parent. The specifics may include weekends, days of the week, holidays, family vacations, birthdays, and more.

Reasonable Visitation - This type of visitation order is less specific than scheduled visitation, but lists the general amount of time that a child should spend with the noncustodial parent. It leaves the specifics up to the parents.

Supervised Visitation - When it is in the child’s best interests to only spend time with the non custodial parent under the supervision of another adult, supervised visitation is awarded. It may also be a scheduled visitation order, and is often used in situations when the child and parent are getting to know one another, or when it is not in the child’s best interests to spend time with the parent without supervision.

No Visitation - In cases where it is not in the child’s best interests to spend time with the noncustodial parent, no visitation may be awarded.

Child Custody Mediation - Often, prior to a custody trial, parents will try to work out their own custody agreement through custody mediation. It can be less expensive, less time consuming, and less stressful to work with a mediator than to go through court.

Child Custody Agreement - Outside of courts, parents can create a custody agreement on their own or through mediation. It can be submitted to the judge as a proposed custody order for approval.

Child Custody Order - A custody order has been approved by a judge, and is a legally enforceable custody agreement. If either party does not follow the terms of the custody order, they may face legal consequences.

If you have questions about child custody in Southern California, contact the attorneys at Yanez & Associates to schedule a free initial consultation with a professional custody lawyer.

What is Supervised Visitation in Orange County California?
What if Child’s Best Interest does Not Coincide with Parents Desire