determining who should get custody... 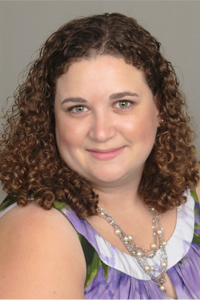 The question was posted: What issues do family law judges take into account when determining who should get custody of the children; how can the child custody orders be modified post-judgment?

Divorce is messy, not only for parents, but for the children involved. Children can go from having a stable view of their family life to being shifted endlessly between two homes. Child custody battles are often negotiated between parents and can become quite ugly. When a judge reviews child custody cases several factors are taken into account including: the child’s best interest—which can include testimony from the child--, the finances each parent is providing to the upbringing of the child, the stability of the parent, and the current family life the child is used to. These factors make for a very difficult equation that a judge must effectively solve to ensure happiness for both the child and the parents.

Several factors are vitally important in deciding a custody case. Child consultations are very important to determining the best interest of a child in a custody battle. If a child can be interviewed, either in the courtroom, via a video interview, or by filling out a questioner this testimony should be considered the most significant piece of the child custody puzzle. Children know where they feel most comfortable and this information should weight more than all outside discussion concerning the child’s living arrangements. This testimony becomes irrelevant when a child is very young, but is crucial to providing the best emotional stable home for an older child. The second issue that should be accounted for is the child’s current lifestyle. A child’s lifestyle includes: the school the child is attending, sports or activities the child is involved in, and the friend circles the child has developed. Trying to ensure that the child has a continuity of their lifestyle is important to the child’s emotional wellbeing and can help the child cope with their parent’s divorce. Third, the stability of the parents needs to be accounted for, as children should not be left in unsafe environments. Parents given custody should be drug free and emotionally stable. Divorce can cause individuals to become distressed, depressed, and may make a parent emotions unstable. Drug tests and psychological evaluations should be used to ensure the safety of the child. Children need to be living with the parent that can support their potential emotional distress best; thus, a stable parent is vital to the smooth transition into having divorced parents. Finally, finances of each parent should play a role in who has custody of a child. A parent that is financially supporting a child needs the motivation to keep making money and therefore, should see their child in some capacity. These factors are not all of the factors that a judge must take into account, but are the main four concerns that a judge must look at when determining parental custody of a minor due to divorce. A judge should weigh these factors out and formulate the best plan for the child’s custody, whether it be seeing only one parent or splitting the child’s time between two separate homes.

A child custody order can be modified post-judgment in several ways, three important modification routes are: 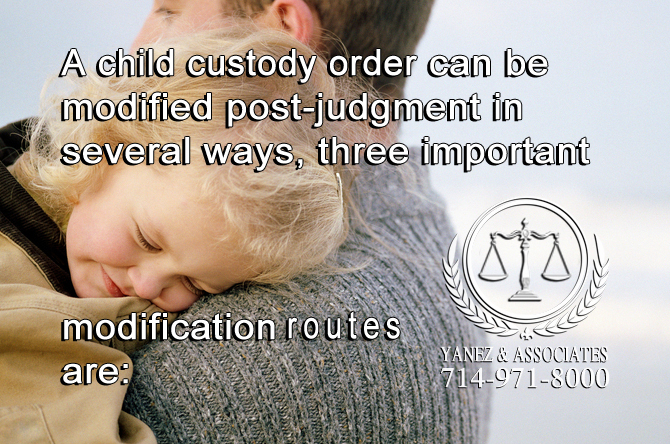 How can a child custody order can be modified post judgment?

Outside of the courtroom, parents may modify their child custody arrangements if the court has not given them a planed schedule. A 50-percent/50-percent custody
arrangement between two parents might look like a child living with one parent during  the school year and another on every other weekend and most of the summer or the child might spend one week at each parent’s house if the parents live within the same city. The first discussed arrangement might be best for consistency for the child, but does not amount to half of 365 days for each parent; this arrangement might become even less days for the summer parent if the child is enrolled in summer camp or has sports training over summer for a school team. The latter arrangement described, provides a true 50-percent/50-percent custody split, but involves more communication between he divorced parents and could make it difficult for a child to arrange play-dates and social events. Vacations can also become problematic due to both families wanting a child on a specific holiday and holidays simply not being long enough to rationally split the days. A trade off of holidays and school breaks therefore, may be a modification that the parents make, on their own, to the custody arrangement. Another change of arrangement that parents might make could occur due to a job transfer of one parent. What may have been a one week with each parent arrangement for a child might become breaks with dad and school year with mom, if dad is transferred to work out of state or country; this arrangement can be difficult for both the child and parents as one parent becomes the true discipliner and the other become the fun vacation parent. In a 100-percent custody case, the parent with custody might allow the child to see the other parent occasionally or the parent with custody might allow the other parent to have supervised visitation with their family members. A negative new arrangement could occur due to a parent’s new partner. The other parent who is not in a new relationship may become jealous and find excuses to keep the child from seeing their other parent and their new partner or the other parent may become busy with the new partner and avoid their responsibility as a parent; inevitably, either of these cases can be extremely emotionally disturbing to a child. Post-judgment modifications to a custody arrangement can be made directly by a parent and may disregard the orders and decision of a court; these modifications can either be a positive or negative change for the child.

Can an appeal to a custody case create a post-judgment modification to the custody arrangements for a child.

An appeal to a custody case may create a post-judgment modification to the custody arrangements for a child. The appeal may occur due to new evidence that make one of the parents less fit for their duties as a parent. An example of this could be new emotional distresses of divorce causing a parent to become depressed and a bad influence for a child; this parent might even start taking illegal drugs and begin a downward spiral. In lieu of this new information, the other parent may appeal the courts decision and try to get full custody of the child to insure the best interest of the child. Divorce can be very difficult for parents and a parent might become abusive towards the child; this would also be a good reason to put forth an appeal to the custody arrangements and perhaps change the arrangement so that the other parent only has supervised visitation of the child. Perhaps a child comes “out of the closet” after a custody arrangement has occurred and one parent holds very negative views of the LGBT community; this would be another reason to change a custody arrangement via the use of the appeals process. An appeal could also bring up new evidence of a new parent’s partner who may have a criminal record that changes the living situation in that parent’s house. Over the years, parents’ lives change and new evidence may need to be evaluated to ensure that a child’s living situation is adequate and safe.

Children often end-up in the middle of divorce battles—especially if the child is old enough to know what is going on—the custody of a child is a complicated issue and can be an emotional issue for a child. While judges are deciding who should get custody of a child, the child should be reassured that they are loved and wanted by both parents to ensure that a child’s self-esteem does not plummet. Often, children view themselves as the cause of a divorce. It is imperative that children know they are not the cause of divorce and instead are truly valued by both parents. Changes in custody can break the lifestyle equilibrium of a child and post-judgment modifications should be minimal and only occur to ensure the child’s best interest.

Judges look at many factors when determining the original custody judgment in divorce cases including: child’s opinion, parent stability, finances, and current lifestyle of a child. A universal solution does not exist for the questions of: who should have custody of a child, what percentage of custody each parent should have of a child, and if a custody agreement should be written with any contingencies. The factors involved in custody battles do not have equal wait and the child’s best interest and personal statements, if any, should be weighted more heavily than the other factors presented to a judge. Post-judgment changes to a custody agreement can be made due to: parent’s outside agreements, appeals to the original agreement, or contingencies in the original agreement; these changes should be utilized sparingly. Changes in a child’s life can cause emotional distress and post-judgment modifications to custody should be highly contemplated and viewed as a last resort.

to learn more about determining who should get custody, contact a family law attorney